Note! This is a long, rambling, wandering post. There are multiple updates with a lot of troubleshooting ideas and some successes. But my original no crank/no start issue persists.

My 323 did not start a month or so ago. I turned the key but there was no response from the starter. I had strong lights on the dash and 12v on my battery gauge so I didn’t suspect a weak battery. I was able to roll and bump start the engine.

After that there were no issues for a few weeks until it happened again. Because it was intermittent, and I have other key issues, I first suspected that the ignition switch was failing. The switch is no longer available from BMW. And I think the current ignition switch is from an E30, which is NLA too. I looked into a keyless push-button start system but did not commit to buying one. Then the car acted normally for another few weeks.

In the meantime I did a lot of research. One possibility was the engine electrical grounds. I re-used all of the E21 grounds so I’m not missing any. It’s possible it could use more but given the intermittent behavior I mostly ruled this out. That left the starter and starter solenoid itself.

One helpful feature in older BMWs with Bosch Motronic is the ability to bypass the key and activate the starter from the diagnostic port. By jumping pins 11 and 14 you give power to the starter solenoid. If the key is off the engine spins without starting (such as when adjusting valve clearance). But with the key on, giving power to the fuel pump, cranking the engine can make it start and run.

I had no cranking on the key so I jumped the pins and… no cranking. To be honest, most Internet diagnosis pointed to the starter anyway. But I was hoping for an easier fix since changing a BMW starter can be a big pain. I smacked the starter body with a long extension and a rubber mallet (using care not to touch the terminals). Follow a couple of whacks with a turn of the key. After the 9th or 10th whack the engine fired up.

After all that guess I need a starter. And maybe some better grounds just for good measure.

Update 1: a new Bosch starter did not resolve the no crank issue.

The starter swap went smoothly and took just under an hour. But when I turned the key there was just silence, like before. I jumped pins 11 and 14 again and it cranked. Interesting. I let it crank but it didn’t actually run. After checking connections for ten minutes I was able to get it to run but it was very very rough. I plugged in a Peake scan tool and there were tons of codes – coolant temp sensor, fuel injector #3, air flow meter, etc. I cleared them instead of recording more. When I checked again there was only the coolant temp sensor fault. I checked spark plug wires and the idle control valve and some other connections and started it again. This time it ran smoother but idled low. I know I have idle and throttle position sensor issues. The TPS is not perfectly set and I have tinkered with the idle control screw on the throttle body. Perhaps in my reassembly after the starter swap I knocked something loose? I raised the idle via the screw and that helped. After the engine warmed up a bit the misfire, or whatever it was, cleared up and it sounded as good as before. But the no crank issue continues to be an intermittent and annoying problem.

Update 2: don’t use FedEx Smart Post for shipping – it takes forever. Even though I’m not in a hurry it’s just annoying knowing I could have had the parts in half the time.

Update 3: the starting problem is getting worse. I have plenty of cranking power but it does not want to catch for the first 30 or so cranks. Then when it does it runs really rough.

The fault code for the coolant temp sensor persists. After reading on the excellent site  www.e30zone.com, the blue coolant temp sensor on the thermostat housing tells the ECU to richen the fuel mixture until the O2 sensor is warm enough to control fuel mapping. It’s a replacement for the cold start fuel injector (the “7th injector”) used on earlier systems. Why am I getting the code?

E30zone recommends a procedure for testing the wiring and sensor using a multimeter. I started with the sensor and it tested fine! That could really only mean one thing: wiring. Ugh.

Update 4: the C191 connector for the fuel injection harness was full of corrosion. The pins were that special shade of blue that promises to dismiss any plans of conducting electricity through them. I replaced the C191 connector with a Deutsch connector. And still the engine cranked but did not start.

Update 5: after confirming the Deutsch connector is passing current I pulled the ECU and checked for corrosion and found none. I then checked the file loaded on the Ostrich chip emulator in case it was corrupt or missing (it passed). So the ECU is probably functioning normally. I wouldn’t rule out heat though. I have my ECU mounted to the firewall on the exhaust side and it doesn’t get any airflow. It’s not much different than in an E30 but maybe the small difference is causing a problem.

On to fuses and relays. On my Euro 1980 323i there doesn’t appear to be a fuel pump relay. And my relays are arrayed differently than the images for a US 320i online. There is a fuse though so I pulled it out, inspected it, rubbed a little Scotch-Brite on the contacts, and reinstalled it.

There is a series of relays for the E30 M20 – DME, fuel pump, and O2 sensor heater. From the notes on the M20 swap wiring I found that the green/violet wire on one of the relays mates to the fuel pump power in the E21 harness. So I jumpered pins 30 and 87 and it fired right up!!! Bad relay? I plugged the relay back in and it still started. Maybe loose or faulty relay operation? It was a new relay when I installed the engine but I will carry a spare anyway. 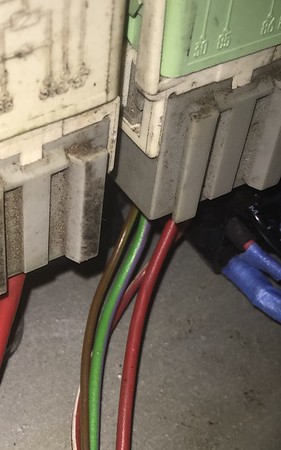 I let the car warm up and had a functioning temp gauge and the engine revved and sounded fantastic so my C191 fix was a succces. Maybe I’ll get a few more driving days in before winter storage.

Update 6: the C191 connector fix seems to be working great. I have not had any sensor or fuel injector codes return. But my no-crank issue persists. My latest theory is that it’s heat related because it’s happened on three long drives. I’m going to try spacing the ECU off the firewall with some rubber grommets to give it airflow and minimize vibration. Engine runs bananas when warmed up though!!

Update 7: it’s definitely heat related and only happens on long drives. I haven’t ruled out a relay connection issue but it’s impossible to narrow down when cold.

Based on another blog (http://baurspotting.blogspot.com/2017/05/e21-no-start-no-crank-ignition-problem.html?m=1) I pulled the ignition switch from the steering column. The wiring on the back looks good and tight (unlike the Baur post above). There is little brown waxy residue on the solder joints. I don’t know if that indicates anything but it scraped off easily.

No smoking gun like a broken or weak connection. This harness runs from the column to another connector in the dash. Then from there it goes to the starter and to the fuse box. The next time it acts up I will have to probe for 12 volts at those two places.

Update 8: I was left stranded at Home Depot when the engine would crank very slowly but not catch. It turned over but extremely slow. It could not have come at a worse time: the starter on my E46 also failed.

The staff at Home Depot was so friendly and offered support and sympathy. They also didn’t complain when I left the car there for three days. Every night I went back and tried something new.

The engine was turning over on the starter so it wasn’t an issue with the solenoid or bendix . But maybe the windings were no longer capable of spinning the bendix.

I traced wires around and pulled the ignition switch again but never found anything out of place. I made diagrams of all the points where 12 volts should be present, to trace a leak. I also pulled the grounds off the alternator and engine block to test. I ran continuity test through each and didn’t find a problem.

Meanwhile it became Winter and time for the car to be stored anyway. I was feeling very dejected.

But then I got inspired and reenergized. Starting at square one there are 12.5 volts everywhere but just 9 when cranking. It feels like a ground issue…. You can never have enough grounds, right? So I pulled one from a stash and connected it from the engine to the chassis. Full cranking and the engine fired up! Turn off, then on. Off, then on. Seems like my existing ground(s) were bad all along.

All that time I spent tinkering and guessing and I even missed a car show. I should have started with the basics. It cost me nothing. Oh, and I guess I don’t really know how to use my voltmeter.

August, 2021: I haven’t done many long drives during Covid. But I’ve done a couple of short drives and local shows. The car has been really good. But at a huge BMW meet near Boston the hot-start issue struck again. This time in front of a small crowd 😦 Turn key, no crank, curse. Repeat three more times. Pop hood – which turns heads in my direction – and pop glovebox for jumper wire. Turn key for fuel pump power, check for neutral, jumper pins in diagnostic port and away we go! I’ve done it enough times now that people are impressed I can “solve” an electrical gremlin so quickly. Funny story I guess, but at my own expense.

November, 2021: just like before, the 323 failed on the last drive of the year. At a BMW meet in Boston it was perfectly fine. A week later I went to move it in the driveway and it’s back to the slow crank again. The battery is charged and worked fine in another car. Confirmed 12v at the starter. I have the new grounds plus one more small one that I added just for the heck of it. Sigh.

November, 2022: I didn’t drive it much in the Spring. Then in May I began a huge overhaul of the rear suspension, 5-speed transmission, and Supersprint exhaust. I didn’t finish until October. While finishing up the no crank issue continued. But in my quiet garage I could hear a distinct click from the fuse box area. I had my son turn the key while I listened. It seems to come from one of the three E30 relays on the outside of the fuse box – main/DME, fuel pump, and O2 sensor heater. I methodically removed each one while he turned the key. It still clicked even with the relay(s) removed. Maybe it’s somewhere else??