Six months of prepping, planning, and test drives. Almost didn’t make it a mile. Filled the tank and restart the engine – VROOOM. 3,000 RPM cold start surge. It hasn’t done that ever. Lumpy idle that eventually smoothed out after two minutes. I’ll take the long way to the highway just to make sure the throttle works.

Satisfied, I get on the highway at 2:00 on a Friday afternoon in the summer. I expected traffic and was not let down. But not a terrible drive and car works fine.

Hop on a four lane divided highway and the skies opened up. No joke – I’ve never driven through so much rain. National Weather Service reported .8 inches fell. In less than an hour. For the first time ever I considered stopping on the shoulder. Splashes from the other side were higher than my 323’s roof! Hidden drawback to a slammed car: no wheel well space for water to pump out. The wheel well literally fills up and you can hydroplane. Luckily these new Federal 13″ tires were excellent and I had complete confidence in the car. Rain lasted about 30 minutes as I continued West.

Traffic thinned out and I was able to cruise at 60 in 4th. Others were doing 70+ but the posted limit is 55. Having a car with 4 speeds and no creature comforts is a revelation. I don’t find myself rushing to catch the cars ahead. Speeds slow down so I’m more alert and can plan ahead better. Such a contrast to the modern SUVs that make it too easy to go too fast.

I’m on Massachusetts Route 2, which is a funny road. It starts in the city blocks of Boston, straight shot through suburbia, into the countryside, becomes even more rural, then former factory towns, and then transforms in the Western part of the state into one of the best driving roads anywhere. From the Mohawk Campground to the border it is a roller coaster. You’ll want to repeat 2-3 times if your brakes are up to the challenge. Or keep going into VT and NY for more great roads and scenery. Just don’t be on a schedule if you’re letting Google Maps guide you. It had trouble keeping me on a planned route.

The 323i ran fantastic. To be honest, I wasn’t really loving the car before today. But all that recent work has checked all the right boxes. The engine is on key – responsive and smooth. The suspension is tight but not too stiff except on really bad pavement. I think it’s over-sprung and needs more give to the springs. The Powerflex bushings were a great upgrade as the car turns in so easily. I’m actually turning in too soon on corners because I’m used to sloppy rubber bushings. It shifts well. The brakes are satisfactory but could be stronger. Everything works, even the lights, wipers, and defogger in a torrential downpour. Pretty impressive for a 40 year old machine. I think I really click with this car now. I’m loving it.

Finally, after six hours in the Recaro seat, I arrived in Glens Falls, NY. It’s about a half-hour from the Saratoga Auto Museum so close enough without having to pay for a pricey hotel. I got an Airbnb off the town square for $50. This town is fantastic. Beautiful old architecture with a busy downtown on a Friday night. Older crowd but something for everyone. I couldn’t decide on a place to eat but settled for a small Italian place that was quite good. There’s not much in this area but these people have established a great place to stay. 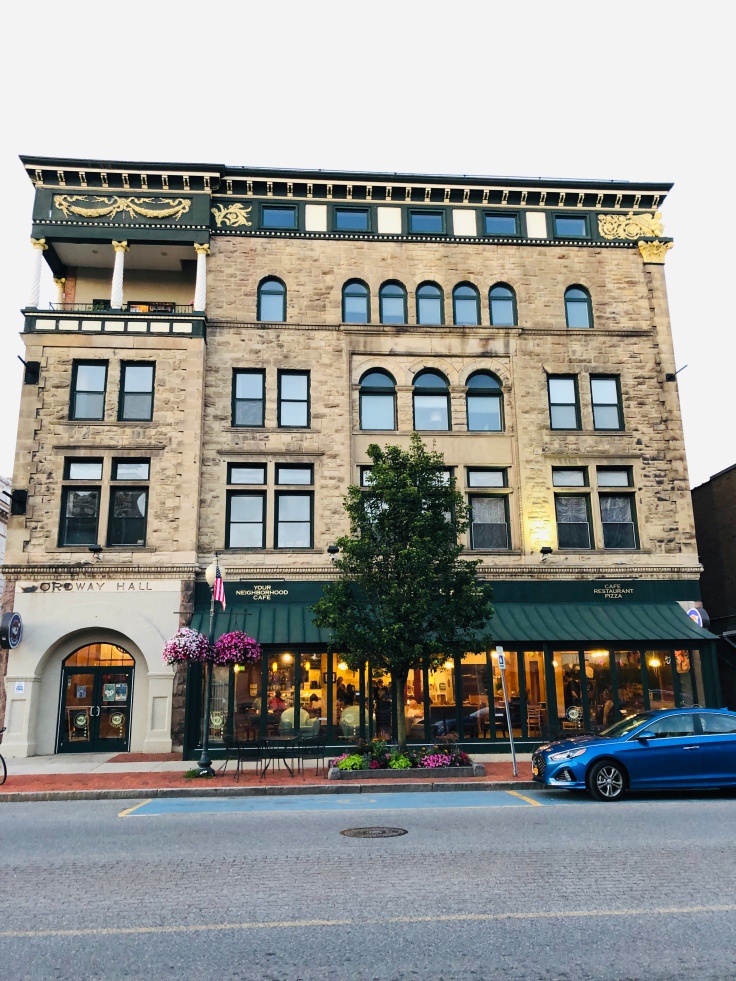 I was early enough to get a spot in the front row along the entrance. But I was just happy to be there. Cars started flowing in around 9:00. I walked the show and chatted with owners. I was pleasantly surprised to find six other E21 owners there. One is a near duplicate to my own!!

The level of prep and finish was astonishing. And humbling. I’m proud of the work I put in but these guys are on another level. I’m of the belief that paint and body comes last so I guess I have a few years to get there.

My gallery from the event:

Highlights of the show were:

Facing a six hour drive home I left around 1:00pm. Unlike the day before I planned my own route home and stuck to it. This worked out so much better. The goal was to get to Route 2 in NY which continues on into Mass. NY Route 2 gets an “F” grade. MA Route 2 gets an “A”. The difference was night and day as soon as I crossed the state line. NY even has a sign that road gets “rough” for 3 miles. More like 20 miles… Rough pavement and dips put my suspension through a stress test. I’m sure I bottomed out the suspension a few times, but better than hitting the oil pan. I was extremely lucky. But the MA Route 2 was billiard table smooth and a joy to drive. I was more cautious with my brakes and coasted through turns instead of trying to clip apexes. MA Route 2 West of the Mohawk Campground is just awesome.

The car was so crisp, smooth, and responsive. I didn’t think the E21 drove like this. The E30 is more refined but this has such a cool vintage feel that’s not unrefined at all. Lots of feedback and weight to the steering. No isolation. Precise and smooth steering. I hope it stays this way!

I’m a big history buff and made a detour to Bernardston to view two historical sites. But they were gone! No more historical markers, 40 minutes wasted, and some wear and tear on the car. This sort of put a damper on the return drive.

No other drama on the drive home though. 483 miles and the M20 didn’t skip a beat except for a sticking idle control valve. No shakes or rattles from the suspension. This trip was a massive success!

Where can I go next?